I’ve created this project with Fabio R. Lattuca in 2013. As you can read in the website manifesto of the project:

Vacuamœnia, from the latin “Empty Walls”, is an identitary and ecological sonic act aimed at the revolution of deeper meanings.
Aesthetic revolution of vacuamœnia starts from the places abandoned by man and the way they sound: a study of existing sounds and of those ones you can organize on the spot by hiking militancy, field-recording and the contact with the territory.

Vacuamœnia starts its action in the Sicilian hinterland, going to play the abandoned villages built to populate rural areas in Sicily during the Fascist period. Pushed by urbanism or nature disasters to forget the countryside, man leaves behind the walls that welcomed him, leaving them empty of meaning. Places lose their definitions and become “Atmospheres”. Vacuamœnia rediscovers these atmospheres through materic action that suggests a vacuum of dense nature, a soundbox. Materials are the musicians, paths and streets are scores written on the ground. Through touch and other senses, each soundscape thus becomes a place of sounds and a work-in-progress musical instrument.

Over time our compositions and installations have been hosted in different parts of Europe, including Hamburg (Klingt Gut! Festival, 2016), Viseu (Invisible Places, 2014), Belfast (Sonorities, 2017) and London (Symposium on Acoustic Ecology, 2013 and Sound and Memories, 2017).

We are part of Manifesta12, inside Cityscripts of Giorgio Vasta. In this project we created soundscapes for three authors (Giorgio Vasta, Emma Dante and Fulvio Abbate).

Our Work Panphonia is published under Cronica Electronica Label

Reverberant Evenings is a solo project born in June 2013 and my aim with this one is to explore the world of Drone Music Genre using a particular melancholic and warm aesthetic based on a “prog” drone idea: long form evolving resonant pieces of computer generated music where I can try different processes of creation.

During these years I’ve recorded for txtrecordings label and I’ve taken part at different web initiatives. 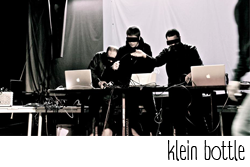 Klein Bottle is a project born in 2010 by four Electronic Music students of the Conservatory “Vincenzo Bellini” of Palermo, Italy. In 2013, more or less, the project has ended for many reasons.

The aim of Klein Bottle was to make live electronics music via laptops in a pythagorean acoustic setting. We did some gigs in London (Ixem) in Rome (Mainoff), Trapani and Palermo but now we sleep.